Almost every Mac user I know hates Windows and they exploit it’s weaknesses (pun not intended) in arguments to make it seems as though it has no redeeming qualities. Clearly that’s not true. I have decided to compile a list of some of those redeeming qualities that I would like to see Apple steal integrate into OS X. The most important thing note that all of these features can be integrated passively i.e. not require anyone to change the way they currently use OS X… so there’s no real reason not to have them.

These items are in no particular order. Sidenote: You may notice that I have Uno installed… that’s because it’s a no-brainer that Apple needs to unify its GUI. That should be the first thing on Apple’s To Do List. For the curious… this is my desktop… Why doesn’t OS X seamlessly connect with ftp, sftp, afs…? When I “switched” I was truly disappointed. Who’s idea was it to include Connect to Server that can’t write to a server? I’m sure there is some excuse for writing being disabled, but finding that out at 2 am while trying to submit my homework left a sour taste in my mouth. Cutting and pasting… has become so natural a function on the computer that I was flabbergasted to find it disabled in finder. Apple just didn’t want this enabled… for no apparent reason. The fact that folders don’t retain the state that you exited them in has driven me CRAZY. Every time I open my Applications folder it opens with the Dictionary in the top left and I have no idea why… If the window opened scrolled to a random position it would have a more likely chance of being handy because now it is CONSISTENTLY wrong. The .DS_Store is in place… but it only saves the windows state if the scrollbar is above where it is pictured…

I know about the Go to Folder in Finder, but it is nowhere as easy and smoothly integrated as the folders path is in Windows. Even just having the option of displaying the entire folder path at the top of the finder window would be helpful. 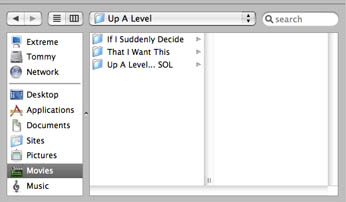 One innovation that I was really pleased to see in IE back in the day was the ability to save 1-5 links deep when saving webpages. I find saving webpages handy to read when I don’t have access to the internet. .Webarchive on the other hand doesn’t even save all the images in a site… is it really that hard to make this feature useful?

Things that should be enabled by default:

Why anyone would only want to tab between text fields is beyond me… in order to be able to tab between all input fields on a form you must check the radio box All controls. Everyone uses the web so much that tabbing between all forms of input is becoming intuitive… and Windows knows this. Furthermore using the arrow keys between inputs is intuitive as well… why not enable that too? 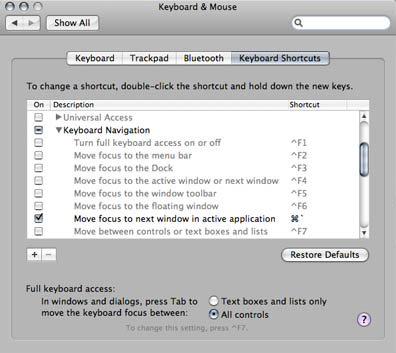 In order to be able to shift the focus between windows of the same application you must enable that in Keyboard Navigation… it’s understandable that they don’t want to show several instances of programs in the Apple + Tab dialog, but maybe they should visually represent the unique instances; otherwise, I think it’s too hard for the average user to discover how to perform this simple function.

There are other suggestions I have for the improvement of the overall OS X experience but those aren’t directly from Windows sooooo… I’ll put those in another page.